Hispanic Heritage Month: A Celebration of History and Culture with Family

As a Cuban American, what does Hispanic Heritage Month mean to me? As a Cuban American, what does Hispanic Heritage Month mean to me? For my family, it’s an opportunity to celebrate the significant contributions and influence of Hispanic and Latino Americans to the history, culture and achievements of the U.S. Whether it’s food, art, fashion, sports, literature or music, our influence on the land we now call home has become a part of everyday American culture.

DYK: The Hispanic population, which includes people of any race, was 60.6 million in 2019 and increased to 62.1 million by 2020, making people of Hispanic origin the nation’s largest ethnic or racial minority. According to the U.S. Census Bureau, Hispanics constitute 18.5 % of the nation’s population.

As we celebrate Hispanic Heritage Month, we acknowledge the rapid growth of Hispanic populations in America. Many are children and families, with 6% under 5 years old and 22% under 18. Over 1 million of us, according to the U.S. Census Bureau, have chosen to call Arizona, California, Colorado, Florida, Georgia, Illinois, New Jersey, New Mexico, New York, North Carolina, Pennsylvania and Texas home.

“The Latino community and Latino history is a fundamental part of American history,” Emily Key, director of education at the Smithsonian Latino Center, told CNN. “And recognizing that and understanding that are key reasons why this month is important.”

Celebrated from September 15 until October 15, this national observance started in 1968 when President Lyndon B. Johnson designated a week to recognize the contributions of Hispanic Americans. In 1988, President Ronald Reagan expanded the weeklong observance to a month. It was subsequently enacted into law on August 17, 1988. The start date of September 15 was significant because it’s also the anniversary of independence for the Latin American countries of Costa Rica, El Salvador, Guatemala, Honduras and Nicaragua. Mexico, Chile and Belize’s independence days are September 16, 18 and 21. Columbus Day or Día de la Raza, is on October 12. Thus, the national observance in the U.S. extends until October 15. 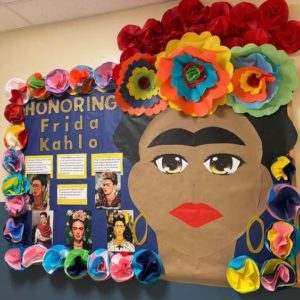 Although many Hispanics are bound by commonalities, such as values, history and language, we are many races and ethnicities from different lands with rich histories and cultures, each with unique identities and customs. Some of us are recent immigrants or second, third or fourth-generation Americans. We come to America from many different countries in the North, South, Central America and the Caribbean. Some of us only speak our native language, while others are bilingual, English-only speakers and/or speak indigenous languages in addition to English and Spanish.  According to the Pew Research Center, in 2019, 72 % of Latinos ages 5 and older spoke English proficiently, up from 59% in 2000.

Hispanic Heritage Month embraces our diversity and highlights the many faces and shades of our community.  Most importantly, it’s an opportunity to share our experiences, struggles and daily life with our fellow Americans. As early as 2008, the U.S. Census Bureau projected that the Hispanic school-age population would increase by 166% by 2050, while the non-Hispanic school-age population would grow by 4%.  Between fall 2009 and fall 2020, the percentage of Hispanic public school students increased from 22% to 28%,, according to the National Center for Education Statistics. The rapid growth of the Hispanic community creates the necessity for educational systems to meet the needs of multilingual learners. Several states continue to improve their language assistance programs to ensure better educational outcomes for Hispanic students.

For example, the Maryland State Department of Education is committed to addressing and supporting the unique needs of the state’s multilingual children and families through educational, community and grant-funded partnerships. Organizations such as  CentroNía, the Chesapeake Multicultural Resource Center and Johns Hopkins Centro Sol offer advocacy, legal and referral services, health and educational resources, and family engagement.

We can celebrate the Hispanic community by supporting the role of families in children’s education. Organizations such as the National Education Association and Scholastic offer lesson plans, book recommendations, activities and other resources for teachers and providers to help educate students about the contributions of Hispanic Americans to U.S. culture.

One thing is for sure about my culture; we love to celebrate! Below you will find a variety of national and local events and activities to celebrate Hispanic Heritage Month with your family!

Check out the MFE Events Page or your local public library and parks department for more Hispanic Heritage Month events.