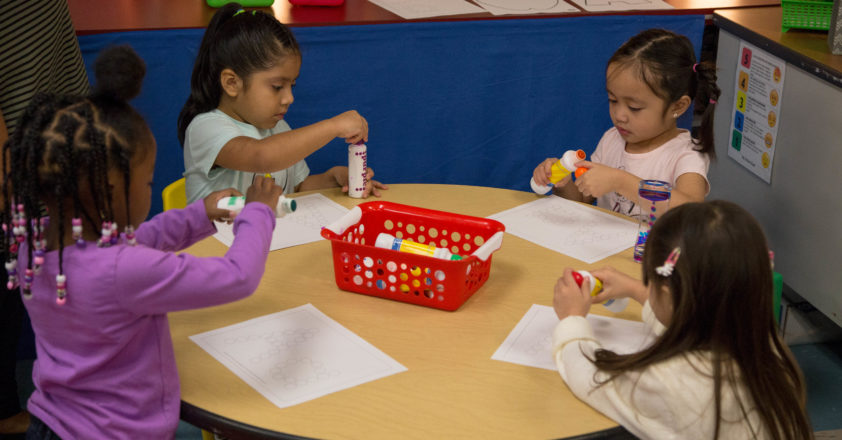 Alonzo Reed can tell his mom more easily about what he did at school these days, even if she still needs to coax some of the details from him.

That skill can be deceptively complex for a young child with developmental delays, but it’s one that the 4-year-old has shown significant improvement in since he started classes with Learning Together: An Inclusive Preschool Program in Harford County.

“He’ll definitely talk about [his day] if it’s something I start a conversation about,” said Charisse Reed, Alonzo’s mom. “[Being] around other children … has helped him tremendously. For a while he was just around his brother, and I’m glad he’s had an early start on his education and learning. Then when he’s older, he’ll have what he needs.” Alonzo was diagnosed with autism when he was 3 years old. His mom had been an early childhood teacher for 10 years and noticed her son wasn’t developing skills at the same pace as other children his age.

To help her son, Reed started with services through Maryland’s Infants and Toddlers Program when Alonzo was 2 years old. She heard about Learning Together, a new, free program for 3- and 4-year-olds through the Harford County Public School System. Once Alonzo turned 3, he could start attending a class two days a week at Edgewood Elementary School, minutes from his family’s house.

“What I like the most is knowing that he’s in a classroom with other children that have similar needs and that his teachers are very well aware of what he needs specifically, and they can work on that on a daily basis,” Reed said.

The class at Edgewood Elementary is one of the five offered at four elementary schools throughout the county. The classes have children with disabilities learning alongside typically developing peers. The environment is designed for all children to have shared experiences while also providing additional support for students with Individualized Education Programs (IEPs).

The county developed the program for their younger learners after seeing the benefits of inclusive classrooms for older students.

“We were seeing that our IEP students, even though they had specific goals and needs and things they needed to work on, worked far better when they were with those who were typically developing,” said Erin Hood, a special educator who has taught with Learning Together since its start three years ago.

“A lot of schools have already changed to that model and have inclusive classrooms, so we thought, why should preschool be different?” she said.

Hood is one of five teachers and five paraeducators who teach the classes, which range in size from four to 10 children. Parents and families can choose classes that meet either two or three days a week, each for 2 ½ hours. In addition to Edgewood Elementary, the classes are available at Homestead-Wakefield, Hall’s Cross Roads, and North Bend elementary schools.

“It’s amazing. I’ve seen such growth in students, especially in language development. Just hearing those other students and those typically developing peers have conversations has helped with talking,” Hood said.

Since the program has limited space, parents and families fill out applications and attend small-group screening appointments to see if the program is a good fit for their child. The program follows an early education curriculum approved by the Maryland State Department of Education (MSDE) called Creative Curriculum. While the classes do include all the learning domains, the primary focus is building language, social emotional, and critical thinking skills.

Jen Erhardt’s daughter, Jaxsyn, was in Hood’s class for two years. Erhardt discovered the program when she was looking for preschool for Jaxsyn, who is considered typically developing and does not have an IEP. She saw Learning Together as a positive opportunity for her daughter, who is now 6 years old and attending kindergarten.

“My younger sister [has] special needs,” Erhardt said. “So, I guess what was appealing to me was … I wanted my daughter to understand that everyone is different, and you need to accept people, that they learn different, they talk different,” Erhardt said. “My sister is nonverbal. I just wanted her to have a basis of understanding that people were different so she doesn’t judge based on that later in life.”

The program is designed to be inclusive in the classroom as well as inclusive of parents and families. Teachers take time to talk during pickup, send emails, and send other communication home so families always know their child’s successes as well as what the class as a whole has been working on.

Through this consistent communication, Erhardt learned how Jaxsyn’s natural inclination to get involved and help others functioned well with the other children.

“I think putting her in this program, from what I understood, she became like a ‘mother hen’ in the classroom,” Erhardt said. “I would highly recommend [the program] to anyone who is looking for a program to put their children as an introduction to school and being around all different peers. I definitely think it’s a great foundation.”

“I liked the fact that all the kids were always included, no matter what they were learning and what they were doing. All the children were included in one way or another,” Erhardt said.

Reed has also been able to see how the program’s structure has benefitted Alonzo, who also receives services through his IEP while he is at school.

“The smaller setting has been able to help him,” Reed said. “In general, I feel like his attitude has been better–he’s always been one to want to learn something new. I feel like he gets that there.  Just in those two hours, I know he’s getting exactly what he needs.”

Alonzo is in his second year of the program, and his teachers and family will decide if he would benefit from another year or move on to the more academically focused prekindergarten program. The balance for Alonzo’s mom is ensuring her son is receiving the extra support he needs and being prepared for school.

“I also try to remember he’s a 4-year-old boy as well, whether he has autism or not,” Reed said. “I want him to be in a classroom with other classmates and engage and do things together with his classmates, just like any other child would.”

A Family Guide to Preschool Special Education Services in Maryland

A Parent’s Guide to Understanding Your Individualized Education Program (IEP)