Promoting a Growth Mindset: Through the Lens of Children’s Literature

How can educators become “influencers” when it comes to building a Growth Mindset? How can educators become “influencers” when it comes to building a Growth Mindset?

First, let’s examine the Growth Mindset theory. Introduced by Professor Carol Dweck over 30 years ago, it all started when she joined her colleagues to conduct research about the attitudes surrounding how students faced failure and achievement.

Through this research, Dweck had discovered that some students showed resilience even when they faced challenges or failures, while others pulled back and demonstrated a lower willingness to persevere, according to Brock & Hundley in 2016.  Dweck’s research ultimately became known as a Growth Mindset versus a Fixed Mindset. As a result of Dweck’s work, I became more interested in the effects of educators on preschool children. During the time, I wondered if it was important for them to have or develop a growth mindset.

As an educator and trainer, I also became interested in discovering ways to promote a growth mindset among early care and education providers in early learning environments. I do believe that it’s important for young children to build a growth mindset.  In my experience, children’s literature provides excellent opportunities to support young children and help them to identify with ideas such as resilience, try, fail, and try again strategies.

For me, the question was: how can early care and education providers foster a growth 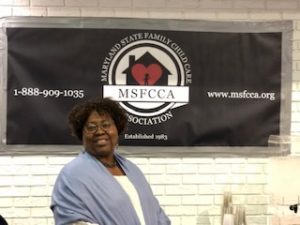 mindset in young children?  My quest for discovery was addressed during the Maryland State Family Child Care Association (MSFCCA) annual conference in Ocean City last year when I conducted a workshop called “Promoting a Growth Mindset: Through the Lens of Children’s Literature”.  The atmosphere in the room was engaging and dynamic as over 70 early care and education providers participated in activities to learn more about a Growth Mindset. However, it was my hope that they would try to apply the principles they learned in their early learning environments.

We discovered, together, that our own mindsets have been influenced by our experiences and perceptions.  As participants teased out their own mindset frameworks, they were able to shed elements of a fixed mindset and transfer their thinking toward a growth mindset. Through engagement activities and illustrations of children’s literature, participants also identified themes within literature and details that support students’ abilities to develop growth mindsets. Finally, participants created mini-lesson plans to demonstrate the application of Growth Mindset ideas into their early learning environments.

As just one of the many professional development opportunities offered during the MSFCCA annual conference, I believe this workshop was very beneficial to those who participated.  I was excited to contribute to the professional growth and development of the participants by introducing to some, and extending for others, the significance of having a growth mindset as a professional in an early learning environment.