Timber Grove’s willingness to take a chance to “revamp” what hadn’t been working, change its approach, and involve families is the first step in family engagement, said Cynthia LaMarca Lessner, Branch Chief for the Division of Early Childhood in the Maryland State Department of Education.

“This was a great idea,” Lessner said. “You’re going to them. You’re making the effort to establish that relationship.”

The cookout also met two goals outlined in the state’s Maryland Early Childhood Family Engagement Framework, and Maryland Family Engagement Toolkit, which detail practical strategies to support educators and providers as they work to improve family engagement in their schools and programs:

“You have the chance to have that relationship, and families will feel more comfortable,” she said. “They’re more likely to come back out.”

In 2011, Maryland received federal funding to enhance family engagement efforts in the state. The following year, the Maryland Family Engagement Coalition was started with the goal of helping early care and education providers, and teachers create deeper, more meaningful partnerships with families of young children. The coalition then developed the family engagement framework, which was approved by the Maryland Early Childhood Advisory Council and State Board of Education.

The toolkit helps give educators and providers guidance and an understanding about what the family engagement framework is, and they often realize that they’re already incorporating many of the strategies that will help them connect with families.

“They see, ‘Oh, I’m already doing this, and they get excited,’ ” Lessner said. “You can see that you’re already successful at this.” 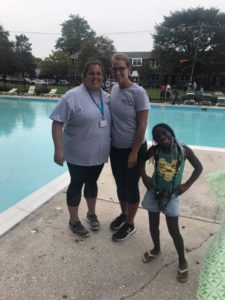 For the Timber Grove community, the teachers and staff who joined parents and students had the opportunity to hang out in a casual atmosphere, steps away from the families’ homes and yards.

About 30 students and almost as many parents responded to the invitation to meet at Timbercroft’s pool area. Because this was the first time holding an event like this, Tedesco and Long weren’t sure about the best way to get the word out, especially before school started. News of the cookout went out on social media, through email, and by flyers at the apartments.

Lessner explained that casual events like this one gives educators and providers the opportunity to gain a broader perspective of families’ lives, and hopefully lead to greater empathy.

“They will have a better understanding of families and what their needs are,” she said.